Change doesn’t happen overnight. Movies tell us that corrupt politicians are thrown out of office on election night in dramatic fashion or that mismanaged governments crash down. But the truth is, the flashpoints we see on the news or crammed into a one-hour Netflix documentary just show the final visible moments. They ignore the years leading up. In that sense, they miss the whole point.

If you want to change Illinois for the better, to make it a better place for families and businesses to reside, you have to understand change doesn’t happen overnight. It happens every night.

A movement for change develops slowly, in starts and stops, off and on at first. It grows like a wave, person-by-person, gaining strength as it goes, until it crashes down over the most powerful political institutions. Just like in the movies.

Political change happens when people change. One person comes to understand something about the world–that Illinois’ government works for the politically powerful, but not the average Illinoisan, for example–and then they help someone else understand and pass it on.

It is daunting, but it is also incredibly empowering because one person can make a difference. It is the only thing that can.

That is what made this past year so exciting. It wasn’t just one person making a difference; it was hundreds of people coming together in small groups to change Illinois for the better.

Throughout the legislative session, the Illinois Opportunity Project was busy recruiting and training leaders to advocate for the free-market movement and against bad policies. At IOP, we believe that investing in people and building relationships will put us in the best position to change our state.

We hosted both in-person and virtual trainings to gather like-minded individuals who care about the future of our state. We partnered with organizations like the Lake County Young Republicans, the LaSalle Republican Party, and the Homer Township Republicans, who swept their elections in April.

We invest so much time in training activists because training changes people. It gives them strength and empowers them with the tools, knowledge, and confidence to help someone else understand what we already know.

We focused on issues that families like yours care about- your children, your representation, and your homes. When the Culturally Responsive Teaching and Leading Standards that inject politics in the classroom and disincentivize good teachers from entering the field was brought forward, we hosted a virtual training to empower regular Illinoisans to stand up against it. Volunteer leaders made thousands of phone calls and knocked on hundreds of doors in the snow, urging people to call their legislators to oppose these standards. 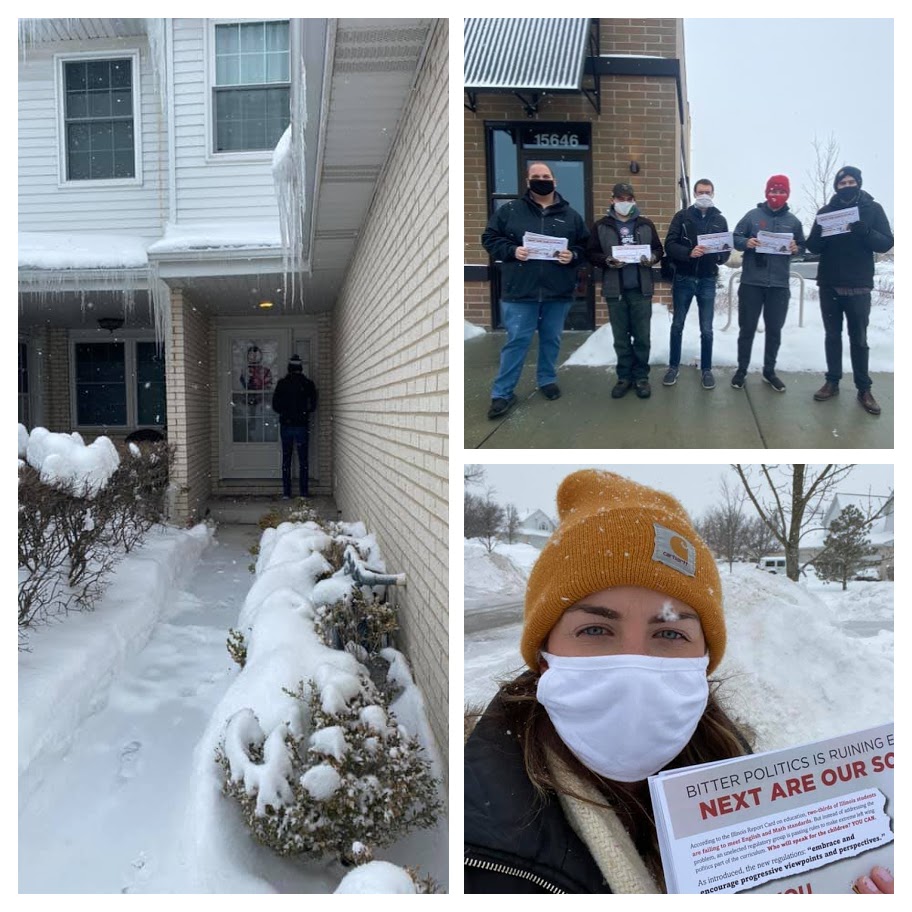 Thirty activists joined our training to inform our neighbors that the politicians in Springfield were once again going back on their word. Democrats drew new legislative district maps behind closed doors to benefit themselves and prevent competitive elections. State Rep. Brad Halbrook joined us to share his perspective from on the ground in Springfield and why it’s important to voice our concerns in support of Independent Maps to our legislators and Gov. Pritzker. These and other local leaders made thousands of calls, talking to open-minded voters on this issue and explaining why it matters.

After the passage of the budget, we hosted citizens who were outraged that after receiving $8 billion from the federal government, Gov. Pritzker and legislators still didn’t protect our homes and did nothing to stop skyrocketing property taxes. We were excited to partner with Wirepoints’ President Ted Dabrowksi to give us the breakdown of why our property taxes are so high and what our elected officials could do to protect our homes. Advocates all over the state are currently calling Gov. Pritzker’s office, demanding he veto the budget and provide families with property tax relief.

Although those in power won’t always do the right thing, we know that change will come from people like you. That’s why expanding our grassroots movement was so critical this session. As we continue to build, we encourage you to join the liberty movement that is already laying the groundwork for the 2022 election cycle.

With folks who are engaged and organized, change can truly happen.