Victor Hugo noted that, “Men become accustomed to poison by degrees.” This perhaps explains why Illinoisans continue to wonder, ‘’Where are the jobs?’ even as national employment numbers rebound. A look at the state’s public policy reveals the degrees of poison Illinoisans have unassumingly swallowed over the past decade.

The Illinois Policy Institute (IPI) recently reported that only 500 private-sector jobs were created in Illinois from August 2013 to May 2014 — the worst performance of any state in the Midwest and the second worst in the country, according to the free-market think tank. The report further notes that since January 1, the state has lost 26,300 jobs, the worst performance by far of any state. The state with the second-worst ranking is Alabama, which lost 2,700 jobs.

During the nine-month period, Illinois ranked last in job creation among the Midwestern states: 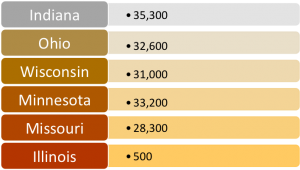 “That’s one job for every 300 high school graduates,” points out Michael Lucci, director of jobs and growth at IPI. “That means kids who graduated this year will either be jobless or will be forced to leave this state [for work].”

While there are reports indicating that the state’s unemployment rate has dropped within the past couple months, Lucci explains that this is because so many people have fallen off the jobless benefits. As people quit looking for jobs, they drop out of the workforce. They are no longer counted. More accurate estimates indicate that since January 2008, Illinois has lost 180,000 jobs.

This state is not creating opportunity. Yet, Illinois’ political establishment refuses to address issues that are critical to restoring economic opportunity. The state’s unemployment rate and overall economic decline is an increasingly urgent crisis – and one we cannot ignore.

Unfortunately, inaction is exactly what the state’s ruling class has in mind. They panic when confronted with a discussion about the pension, Medicaid, education, tax or budget reforms that would modernize their respective systems and protect those who are served by them in a workable, sustainable manner.

In fact, those who defend the status quo go so far as to make the accusation that these calls for action to heal our economy are somehow designed to do harm. Then, they kill reform-focused policy by keeping it in Rules Committee. The political elite, instead, spend their time passing laws to rig elections (as with HB 105 and a myriad of advisory questions that will be added to the November 2014 ballot) and continue to place unfunded mandates on already over-burdened employers.

Why? When push comes to shove, the political establishment cannot resist political pressure from the constituencies they serve: the public sector unions and other special interests who fund their campaigns.

The ruling class demonstrates cowardice and weakness in a time when courage and resolve are desperately needed. Worse than that, they do this intentionally – as a means to their end goal of maintaining power. At best, this demonstrates their negligence; at worst, their malice.

A politician has value to the extent of the policies for which he advocates. Talking about reform isn’t the state’s affliction. Failing to implement reform by blocking any discussion of it – legislative suppression – is the venom that is quickly spreading to the heart of Illinois.

The antidote is a Policy Revolution. Illinois has implemented a wide variety of toxic policies that are poisoning the state’s economic future. As citizens, we can take action today to administer the antidote. The first step is to back candidates and legislators who recognize the need for this reform-focused policy revolution and advocate for it at each opportunity and at every decision point.

Join our Policy Revolution at illinoisopportunity.org, because Illinoisans struggling to carry the burden of an increasingly noxious political class and its failing economy need potent solutions to fend off the contamination created by those protecting the status quo. They deserve a real economic recovery, jobs, and competition. They deserve representation that is willing to confront this crisis and implement the necessary and redemptive policy that will stop the spread of the ruling class’ poison.