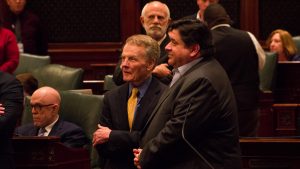 Last week the Special House Committee kicked off hearings investigating Mike Madigan for his alleged involvement in a bribery scheme with ComEd.

Gov. Pritzker wants to have it both ways. He seems to want Madigan in power, but also wants to appear tough on corruption. When asked about the Speaker and the upcoming hearings, Gov. Pritzker offered a bland, “There are questions that need to be answered by the speaker.”

Pritzker, the highest-ranking elected official in the state, could do something about it and pressure Madigan to answer the questions or resign. But Pritzker seems content. He refuses to demand Madigan’s resignation leaving him in charge of the statehouse, and in charge of your pocketbook this November.

Naturally, most House Democrats have followed Pritzker’s leading from behind approach. Most have ignored the Madigan scandal. That is because House Democrats are more concerned with another issue: consolidating more power to increase your taxes. They are less worried about rooting out the culture of corruption in Illinois led by Mike Madigan and more worried about you rejecting their power play.

For example, when asked should Mike Madigan resign by the Chicago Sun-Times, Geneva Democratic candidate, Martha Paschke wouldn’t even mention Madigan’s name citing the conversation shouldn’t be centered on “who is to blame” for corruption in Illinois but that the answer is “greed.” Meanwhile, she continues to advocate to take more of your money to attempt to pay for Illinois’ financial mess.

Representative Diane Pappas (D-Itasca) says “ethics in government is much larger than one single person.” Yet, she wants you to trust these same people with more power over your hard-earned money.

Democratic candidate Jennifer Zordani from Clarendon Hills acknowledges corruption’s “real costs on our state.” Yet instead of handcuffing legislators’ taxing power who have abused state funds, she’s advocating to give more power to an untrustworthy governing body.

Even Democrat State Representatives such as Terra Costa-Howard (D-Glen Ellyn) who have finally called for Madigan’s resignation are still taking his money and campaigning to give him more power by opening the Constitution so he can determine your family’s future in Illinois.

Politicians like these are campaigning for more power while refusing to advance ethics reform or hold their own leaders accountable. Madigan has made it abundantly clear that he has no intention of resigning, and they have no intention of limiting his powers.

The graduated income tax amendment is more than just a tax change. It is a stand-alone issue and should be viewed in the context of politics and power. Do you want to reward the corrupt Springfield ruling class with more power?