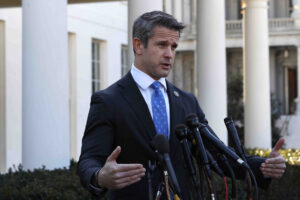 In an interview with Crain’s Chicago Business last week, Congressman Adam Kinzinger said, “If I ran for governor, I think I’m the only candidate that can win.”

His comments reinforce a common misreading of the 2022 political landscape.

2022 will be a referendum on Governor Pritzker and his performance, and so far, things don’t look good for the incumbent.

In 2018, candidate Pritzker ran against then-Governor Bruce Rauner who was so unpopular he barely won the Republican primary. The Republican Party division was further driven by a newly created “Conservative” party whose candidate spent nearly $5 million to garner 4% of the vote in the General Election.

In his campaign, Pritzker ran against President Trump as much as he did Governor Rauner. It was a good strategy at the time because in a Paul Simon Institute poll from September of 2018, 54% of likely Illinois voters said Trump’s record in the office made them less likely to vote for a Republican.

Pritzker entered the race with these local and national winds at his back and spent $170 million to make the election a referendum on Rauner and Trump. No one has ever spent more to become Governor.

Even with all this going for him, Pritzker won with an underwhelming 54.5% of the vote.

For his 2022 reelection, the script has been flipped. It is now Pritzker who faces national headwinds. Only 42% of Illinois voters approve of President Biden, according to a November CIVIQS poll. A drastic slide from the 57.5% who voted for him a year ago.

If the national environment won’t help Pritzker, will the local?

It isn’t likely. In 2018, voters rejected Trump and Rauner; they didn’t embrace Pritzker.

If The Princess Bride is right and the most famous classic blunder is getting involved in a land war in Asia, a close second for politicians is to assume a mandate when they don’t have one.

Pritzker fell victim to this trap and governed as if he won in a landslide. With one eye on a future Presidential run, he set out to make Illinois the most progressive state in the nation.

But Illinois voters don’t want uncompromising ideology. They want real-world results. That is why a poll this month from The Illinoize showed Pritzker with a 50% approval rating despite airing $7 million in ads last quarter.

And an honest look at the problems families and small businesses face shows they aren’t materially better off than they were three years ago.

Illinoisans pay one of the highest tax burdens in the nation, even without taking into account the taxes necessary to pay for the $110,000 in government pension debt per household, as detailed in a recent Wirepoints’ report.

Pritzker has failed to keep the costs down of everyday goods. For example, the average price of a gallon of gas in the Chicagoland area is $3.64, up from $2.54 in November 2018. Pritzker made things worse by championing the largest gas tax in state history.

Illinoisans already rejected Pritzker’s cornerstone policy when they were given a chance to vote on his graduated income tax last year. The tax lost by 6.5% while Biden Illinois won by 17%. A clear repudiation of Pritzker’s big tax and spend approach.

With this track record of results, Gov. Pritzker can’t go to voters in 2022 and offer more of the same.

His best hope for winning is to make the election about his opponent. He can’t run on his record, so he’ll have to make the Republican alternative so unacceptable that voters go with him by default. Just like he did in 2018.

Over the next 11 months, Gov. Pritzker will camp out in a television studio and record $200 million worth of ads. He will try to make this a campaign about President Trump and about Republicans’ so-called “extreme positions.”

He’ll work to frame the election on anything other than his failure to deliver tangible results for Illinois families and small businesses.

Which brings us back to Congressman Kinzinger.

The question of 2022 isn’t: is Kinzinger the only candidate who can defeat Pritzker? It is: has Pritzker done enough to win, regardless of who his opponent is?

Yes, not just any Republican candidate can win. But that isn’t the same as saying only Rep. Kinzinger can.

To win, the Republican candidate will have to offer an action plan to alleviate the concerns of ordinary voters while offering a vision and biography that can withstand Pritzker’s attack ads.

But whoever the nominee is, the national environment and Pritzker’s electoral weakness provide a golden opportunity for Republicans up and down the ballot to earn voters’ trust and deliver tangible results for ordinary Illinoisans.