As my three children have grown, I’ve watched them face some of the same enticements that seem to burden so many adults, especially those in public life: the temptation to abandon principles for the security of fitting in; the impulse to protect a friend from the consequences of their actions; the fear of failure; and the pressure to cover up a mistake. Nothing in my life has been more gratifying than seeing the core values my wife and I have taught our kids —honesty, integrity, charity, faith— manifest themselves in the face of those enticements.

We have always offered praise and encouragement in the circumstances where our kids’ character has overshadowed the intense pressure to bend to the will of their contemporaries. We do so, because the wider world they are preparing to step into generally does not. Courage is always a choice, and permission to move forward with boldness has never, and will never, be given by the many who are compromised and fearful.

Unfortunately, there seem to be fewer and fewer examples of prominent men and women who are able to put core principles into practice.  We live in a society that re-elects politicians who are under indictment; keeps children trapped in failing schools to protect adult stakeholders in the education system; and empowers a ruling class that protects its own, while the people they serve pay the price.

The College of DuPage Board of Trustees provides the most recent example. In this situation, elected trustees have placed their own interests ahead of students, faculty and taxpayers. They voted to reward an ineffective and seemingly unethical President with a lavish severance package.  College President Robert Breuder received a vote of “No Confidence” from the college’s faculty.  He should have been fired. The trustees decided instead to offer him a buy-out and name a building after him, even as taxpayers screamed in protest. 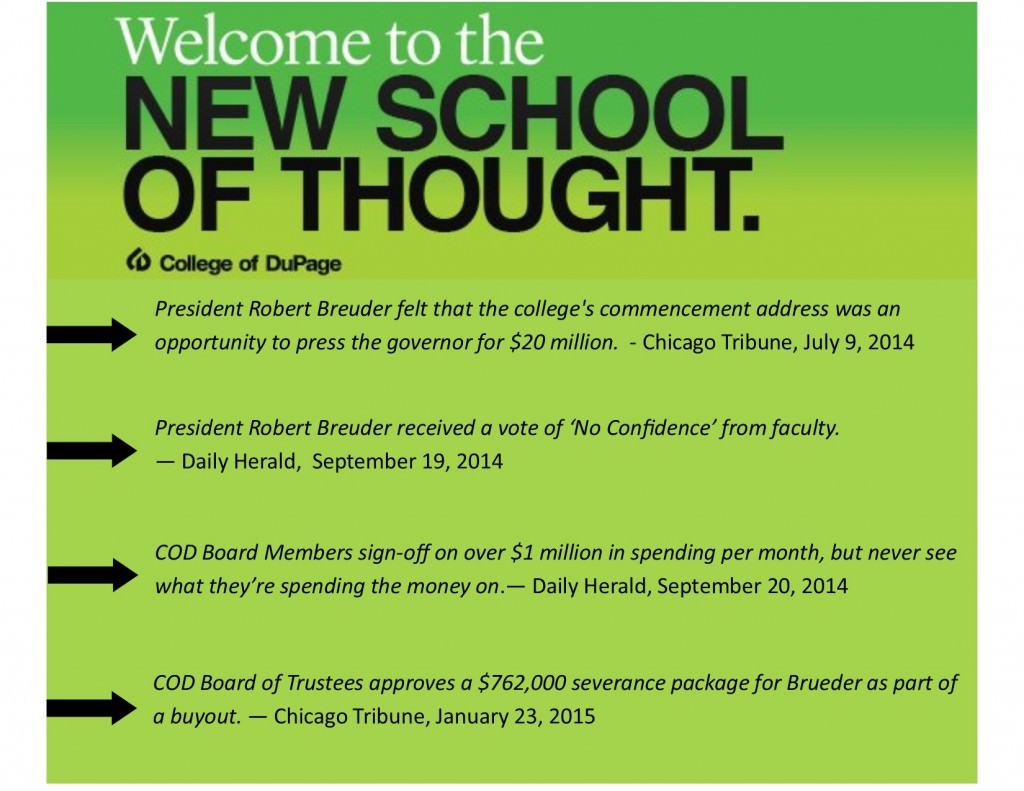 We see situations of group-think, cronyism, and political cover-ups at all levels of government. At no time have critical and independent thought, political courage and social risk been more necessary as we shape the future of our nation, our state, our communities and our families.

For that reason, I am grateful to those in prominent positions—especially elected officials— who stand by their values, even as they are eviscerated for them.  These are the kind of people we should fight for every day.

We should fight for leaders who believe in something greater than themselves and recognize that their job is to make the lives of those they serve better and more prosperous.

We should fight for leaders who inspire those around them through their actions, as well as their words.

We should fight for leaders who embody the innovation, independence, compassion and courage that we deserve to see in government.

We should fight for leaders whose core values provide the possibility of a better, brighter future, not just for my children and yours, but for the generations to come.

We need you to join this fight! Visit our website www.illinoisopportunity.org to join our Policy Revolution and to post why you believe we should fight for better government in our state and communities.