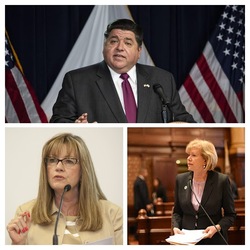 While on the campaign trail in 2018, Gov. Pritzker was asked if he would veto a legislative map that was “in any way drafted or created by legislators, political party leaders and/or their staffs or allies?” He said YES, he would veto.

In 2020, Senator Melinda Bush (D-Grayslake) penned an op-ed in the Daily Herald in support of the Fair Maps Amendment. She emphatically stated that “Gerrymandering is an enemy of democracy.”

The Fairs Maps Amendment (SJRCA 18) would have removed politicians from the map-making process and instead giving the power to an independent commission.

In 2016, Sen. Julie Morrison (D-Deerfield) said in her Daily Herald candidate questionnaire, “While general elections should serve as a built in system for term limits, years of gerrymandering have left this option quite near impossible. This is why we must support non-partisan redistricting reform, such as Independent Maps.”

Now, when Sens. McConchie and other Republican leaders introduce the same legislation months away from the map deadline, not one of these Senators or Gov. Pritzker will throw their support behind it.

Gov. Pritzker and this group of Senators recite slogans while asking for your vote, sponsor legislation and get the good publicity even though they know it won’t go anywhere, and then hide from the issue when it’s actually time to put their words into action.

They are lying to you.

They preach about holding corrupt leaders accountable, but hold onto partisan map-making to protect these same politicians.

They preach transparency and then schedule public hearings that serve as an opportunity for voters to voice their opinions on how the maps should be drawn and their thoughts on the process at the same time.

They’re lying and can’t be trusted to draw a “Fair” map that will determine the elections in our state for the next 10 years.