Last week, Democrats gathered in Philadelphia for their national convention. Among other things, they extolled the virtues of organized labor and government workers. This week, voters in Illinois are facing a reality check regarding such virtues: The American Federation of State, County and Municipal Employees (AFSCME), the state’s largest public sector union, is preparing to strike over contract negotiations with the Rauner Administration.

According to the State Journal Register, “AFSCME is conducting strike assessments throughout the state…” 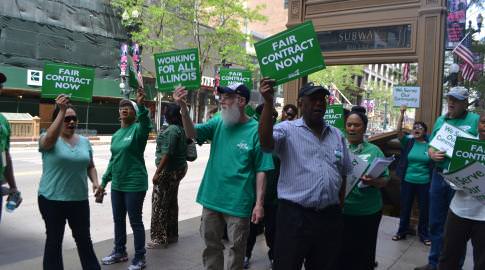 The negotiations have demonstrated the overwhelming power of AFSCME. At least 18 unions – including Teamsters and Illinois Federation of Teachers – have ratified contracts with the state. Instead of joining their union brothers and sisters who have negotiated in good faith with the state and agreed on contracts that took into account Illinois’ dire fiscal situation, AFSCME has used its size and influence to engage in a misinformation campaign and to duck the process it once promised to follow.

The issues are familiar. AFSCME wants higher wages – 29% over four years, to be precise. They are demanding a 37.5 hour work week and full health benefits for part-time and even laid off workers.

Illinois has been a blue, pro-union state for decades. But now AFSCME and its approximately 38,000 workers have tested the limits of the state’s historic support. They have tested the tolerance of the Illinoisans used as pawns in the labor strike game – hourly employees and those in need of state services. And, they have tested the leniency of the state’s taxpayers – families and businesses – who are being asked to shell out even more of their hard-earned money to mollify the demands of a powerful and politically-aligned public sector union.

And while AFSCME’s demands have been indulged by some business and civic organizations who understand the impact of labor chaos on the state’s ability to attract jobs, they have enraged many who have not seen a pay increase in years.

The Rauner administration has offered reasonable – and sometimes generous – concessions on union contracts. Yet AFSCME persists in their absurd demands. If not for the governor’s resistance, AFSCME would have their way. But resistance can only get the state so far.

It is time for a policy revolution, led by bold initiatives that will give people dominion over their own lives and restore prosperity to the families and businesses who are being crushed under the weight of government. Policies like school choice and pension reform, which will take control away from bureaucrats and, instead, give it to families and individuals. Policies like workers compensation reform and collective bargaining reform, which will make Illinois an attractive place to do business. Policies like the Independent Map Amendment and term limits, which will rein in the influence of career politicians and special interests.

2016 must be the year that we bring an end to Illinois’ War on Taxpayers, an unrelenting assault propagated by a divisive and corrupt political culture that with its every act and decree says, “Insiders count. People who play by the rules don’t.” We must demonstrate to a new generation of workers and families that there is a path to transforming Illinois into a state in which they can build their lives. We must demonstrate to business owners – both large and small – that Illinois is a state capable of producing economic opportunity. And that it is worthy of investment once again.

There is only one path: speak up for those who believe in the dignity and capacity of the individual citizen; who believe that government is meant to serve the people rather than supervise them; who trust Illinoisans enough to tell them the plain truth about the crisis we are in, and to lay before them a specific, credible program of change big enough to meet the challenge we are facing.