The 2014 Elections were a big win for the liberty-minded. In Illinois, we saw the election of a pro-business governor. It was an important victory, but if we are going to continue to advance free market policy initiatives in Illinois, we are going to have to alter our approach heading into the 2016 elections.

The next election is likely to involve a very different group of voters, and we, as Republicans, need to realize that what brought us success in 2014 isn’t necessarily a compendium for what will work in 2016. If we are not careful, this victory could be short-lived.

The biggest difference between the electorate of the 2014 Midterm Election and 2016 Presidential Election will be those who didn’t vote. National turnout data says roughly 83 million Americans voted in the 2014 Midterm Election; in the last Presidential Election, about 129 million people turned out. Who are the missing 46 million voters? They’re mostly from the Democratic base, who typically don’t vote in midterms, but reliably show up for presidential contests.

According to exit polls, this year’s electorate was 12 percent African American, 8 percent Hispanic and 13 percent between age 18 and 29. On November 4, these groups voted Democratic by 89 percent, 63 percent and 54 percent, respectively. 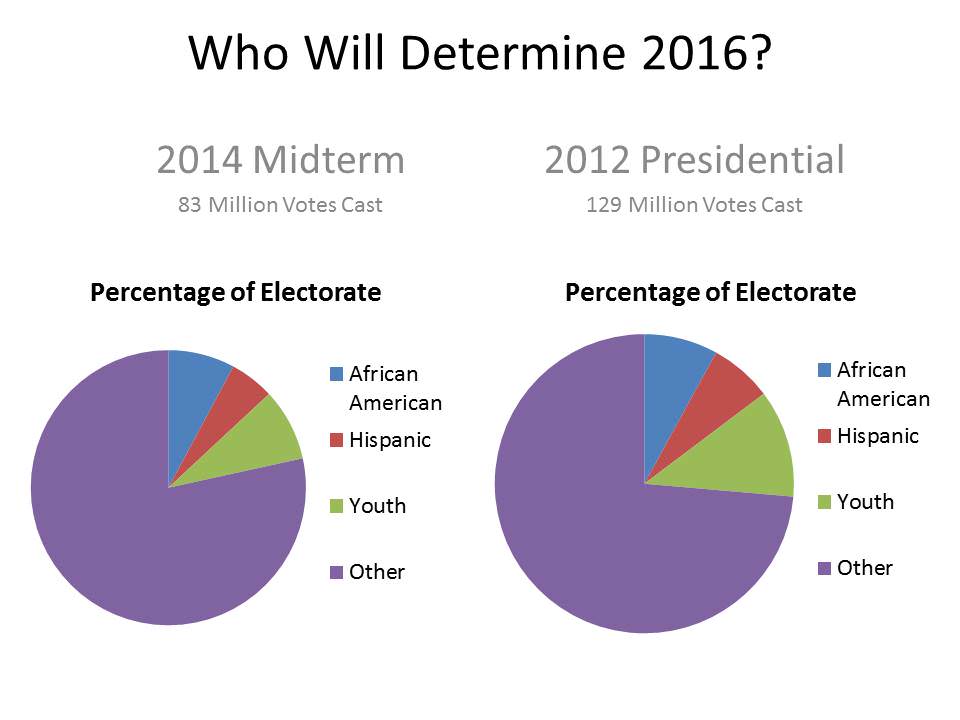 In other words, the Democrats are coming.

What does this mean for state politics? Newly elected Governor Bruce Rauner has made it clear that he is focused on the long-game. His strategy is to rebuild Illinois. Implicit in that strategy is picking up seats in the Illinois General Assembly (ILGA) in 2016.

Republicans, who believe in the free-market policy solutions that will turn Illinois around, are going to have find effective ways to distinguish state issues from federal; and, appeal to center-left voters to split their ticket in the General Election. This is difficult. It will require innovative strategy, a powerful grassroots effort and independent thinking in an increasingly partisan political arena. A free market ideology is a winning ideology if it is presented – over and over again – as one that unifies and uplifts.

This starts now. The work to educate the electorate on policy solutions and to clearly identify which legislators are fighting for these solutions has already begun. It is imperative that the benefit of free-market solutions over big government solutions and the contrast between candidates are clear in the mind of every voter going into the voting booth.

At The Illinois Opportunity Project, we have established an approach of developing and investing in talented leaders. We are also diligent in our analysis of a political landscape that is in transition. Our work to date is helping us to develop a strategy to influence Independents and persuadable Democrats to vote for liberty-minded candidates in the next election.

As the 2016 election season intensifies, we need to keep our eye on the prize. Every one of us has a role in the achievement of this victory. In short, we are the ones who will determine the outcome of the 2016 Election. Join our Policy Revolution by donating $25, $50, or $100 today, or contact us about becoming an advocate in your community. Together, we can be sure that the victories of 2014 are enduring and consequential.

It is good to bring balance to state government. It is better to finish the job – to lead Illinois in a whole new direction.