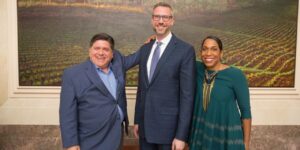 A version of this piece appeared in the Chicago Tribune.

In the Chicago Tribune, State Treasurer Michael Frerichs argued that Illinois Democrats shouldn’t write off rural voters. He has the dynamic backward.

The Democratic Party hasn’t abandoned rural voters. Rather, thousands of rural and suburban voters have left the Democratic Party because it pursues policies that undermine their livelihoods and consolidates power in the politicians’ hands.

For years, rural voters have been trying to convey that they aren’t happy with the Democrats’ policies. In 2014, Mr. Frerichs was first elected Treasurer with 48% of the statewide vote. He won by earning 65% of the vote in Cook County while only receiving 39% in the Collar Counties and 38% in the other 96 “Downstate” counties.

Last year, Frerichs advocated for the Tax Hike Amendment, which was rejected by 67% of voters Downstate and 53% statewide.

Frerichs decries the political professionals who argue Democrats should write off Downstate Illinois. Yet, Pritzker and Frerichs’ policy agenda suggests they already have.

What solutions does Frerichs have to offer Downstate families? Is his model solution the 67% tax hike he voted for as a State Senator? Is it giving more power to Springfield with a graduated income tax?

Or does he mean the policy agenda we’ve seen during the last two years?

In 2019, Gov. Pritzker doubled the gas tax, hitting rural and suburban families particularly hard. At the federal level, Transportation Secretary Buttigieg is floating the idea of a mileage that would further burden these same families.

This year, Pritzker wants up to $1 billion in tax hikes on businesses and blue-collar job creators. The same jobs middle-income workers rely on to support their families.

Democrats forced through an increase of the minimum wage to $15 while refusing a regional approach to limit the pain inflicted on rural workers.

This session, Democrats appear intent on utilizing a partisan redistricting process to consolidate power in their own hands.

While paying lip service to rural families’ challenges, Frerichs seems to forget that he has been Treasurer for six years and his Party has controlled both chambers of the General Assembly for decades.

If Frerichs has solutions to the economic woes of rural and suburban voters, what is he waiting for?

These policies don’t work for rural families, and quite frankly, they don’t work for middle-income families regardless of geography. They work for the politically powerful.

That is why rural voters have fled the Democratic Party. The question is, will the rest of Illinois voters join them?