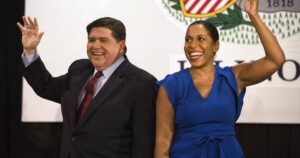 This is the approach of the people elected to be fiscally responsible in the Land of Lincoln. The empty threat last week lobbed by Lt. Governor Juliana Stratton proves that the folks in Springfield have no interest in tackling the real issues that have dragged the state’s finances through the mud for decades. The argument that the Tax Hike Amendment will only involve the rich is fool’s gold. If you think Wilmette types will be the only one forking over money, you’re dead wrong. People from Alton to Antioch will find out how “rich” they really are.

When you read the Amendment language, ask yourself where the rates are, where the tax brackets are, and how often can untrustworthy Springfield politicians raise your taxes. You won’t find answers and that’s a very big problem. If handing over tax power to a man under federal investigation doesn’t set off alarm bells, then maybe knowing that the State Treasurer Michael Frerichs already has his eyes set on your retirement money should.

Governor Pritzker knows that his $56.5 million investment isn’t working. He was dealt a bad hand and instead of playing his cards, he’s sending Stratton to double down. Illinois taxpayers are going to be smart this time around. They’ve seen this game of poker before. They can smell something that isn’t right.

Time for Illinois taxpayers to go all in and call Stratton’s bluff.