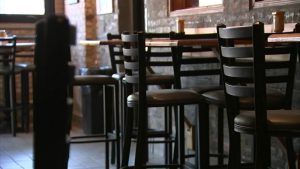 Gov. Pritzker is looking to impose more restrictions in different regions throughout the State. He wants stricter guidelines on indoor dining at restaurants and the size of gatherings, on top of the already established mask mandates and fines for businesses that fail to enforce his orders.

The Metro East was threatened to get their house in order by September 2 or they will face “mitigation.” This comes after much push back from local leaders who understand the consequences it would have on struggling small businesses.

The same goes for folks in Kankakee and Will Counties. Pritzker has ordered the end of indoor bar and restaurant services. Essentially, putting some bartenders out of work once again.

“We can’t keep taxing the hell out of all of our people who make substantial incomes“We were totally closed for three-and-a-half months. Then open for two. Now we’re closed again,” he said. “There’s not much more than we can take. We can’t survive like this,” he said. “We haven’t even come close to making back what we lost. We’re still trying to dig out of that hole they dug for us.”

Chicago small businesses have had to face more than just COVID closures, they’ve faced rioting, looting, and destruction of property. Small business owners, Janel and Jackie Johnson’s ice cream shop in the Loop suffered thousands of dollars in property damage from looting and rioting in the city after months of shutdown.

But the one thing you can do to help your favorite local business and lessen their burden is make sure they do not get hit with higher taxes.

The graduated income tax hike would raise taxes on the 110,000 small business owners who have endured months-long shutdowns, uncertainty over when they might be shut down again, and city officials’ failures to control rioters and looters.

Gov. Pritzker failed to do the right thing and take the tax hike off the table. Now, you have the power to decide what happens to these small businesses.