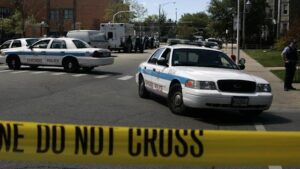 It has become a sad routine to wake up every Monday morning and read the headlines recapping the tragedy and destruction in the City of Chicago.

Today is no different. Longtime Chicago business owner, Joe Perillo, is saying “enough is enough” after his storeroom was robbed in broad daylight in the high-end Chicago Gold Coast neighborhood.

He emphasized that he doesn’t want people to feel sorry for him, but for the countless business owners, employees, and even the robbers who feel hopeless and abandoned by the city and the State’s leaders.

There were also some startling numbers, including the four people fatally shot and 24 injured over the weekend. The youngest was only 16 years old. That would bring the Chicago homicide total to more than the previous 756 deaths reported in 2021. And over 1,000 deaths in Cook County. The highest numbers in 27 years.

Crime and public safety have been dominating the headlines, and rightfully so, but they aren’t the only issue plaguing Illinois families.

The most vulnerable people in our society are struggling, and our state government is failing to serve them.

Today, WBEZ published their story talking with families whose children with severe disabilities have been forgotten and abandoned by the state of Illinois. Desperate parents who are speaking up and fighting for their child’s right to a proper education and fulfilling life are falling on deaf ears. Gov. Pritzker’s State Board of Education couldn’t find the time to show up to a committee hearing to answer questions and explain if they even care about these families and their children.

As we’ve discussed and exposed many times, the State of Illinois is failing these families and their loved ones. And now after a year and a half into the COVID-19 crisis, the rising rates of inflation, and the labor force shortages, these families and their children are in unprecedented danger and at risk of their behaviors regressing to a point of no return, or even worse circumstances.

“It is very very stressful. Nobody wants to give up on their kids and we are all determined to do whatever it possibly takes in our power to keep our kids safe, but sometimes we are without options.”

All of these challenges leave us with a choice as we close out 2021 and enter 2022. Is this the type of leadership that deserves another chance at power?

Has Gov. Pritzker’s leadership made Illinois and your family better off or worse off? Are you satisfied with a state government that fails to protect its citizens’ lives and livelihoods and fails to provide proper services for the most vulnerable? Is that the state you want to continue to live in and subsidize with your hard-earned tax dollars?

If so, then maybe J.B. is your guy. But it seems more and more evident that most Illinoisans are on the side of business owner Joe Perillo and the “Enough is Enough” movement.